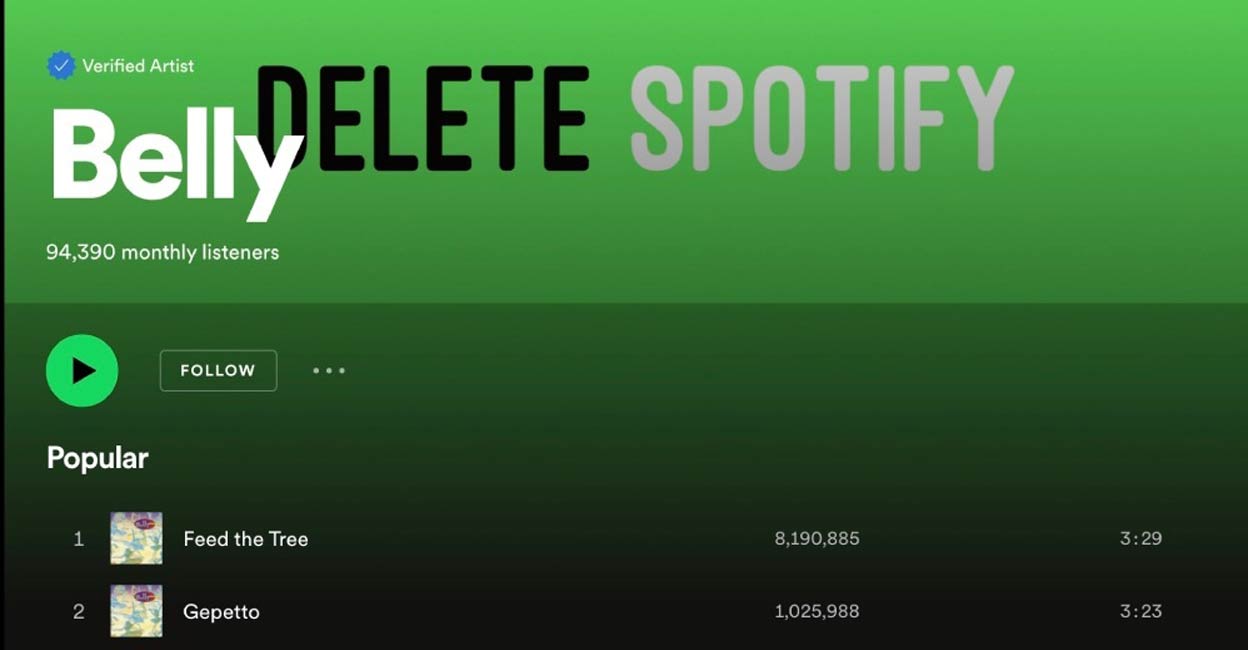 The alt-rock band’s social media accounts indicate they’re particularly not fans of the audio streaming giant, Spotify’s payment policies or its stance on Joe Rogan, according to “Variety.”

More recently, Belly tweeted: “Strictly from a business perspective: hateful enough that @Spotify doesn’t pay its artists, but uses that revenue to fund Covid misinformation, prolonging the pandemic that has kept us all from earning revenue from tours. more obvious #cancelspotify + #maskup #GetVaccinated”

While record labels typically own the rights to the catalog or musical artwork, artists can often control the images that accompany their pages on the platform through the “Spotify for Artists Portal”.

It is highly likely that a representative of the group uploaded the image independently of the rights holder. This is why the image in question only appears on desktop computers and not on phones.

As for the band, they mentioned in their recent Facebook post that they are trying to remove their music from the platform, but the process is “difficult” and “very complicated”.

The message read: “There are many ways to listen to our music. If you can find a way to avoid taking over a platform like Spotify, we say ‘noice job!’ Originally Spotiify was just about hosting content, now they’ve moved on to paying for exclusivity. They’re making harmful choices. It’s not a matter of taste, it’s a matter of truth.”

He continued, “Chaos and crisis can be a very profitable environment. Some find ways to exploit that environment and seek to prolong it for their own ends. It hurts the world. Hurting the world sucks. Why are we we still “on” Spotify if we don’t like them? It’s very complicated.

The message concluded: “Once you’re in it’s hard to get out of it. We’re looking at the options but you’ll see there are many who oppose Spotify’s policies which are still there, an indicator difficulty.”